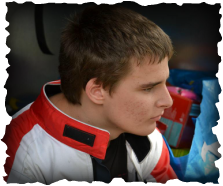 FACTS ABOUT JORDAN
BIRTHPLACE – Orange, NSW
LIVES – Gold Coast, QLD
NICKNAME- Jordo
INTERESTS – Gaming/Basketball/Graphic Design
KART NUMBER – 27
2017 will see Jordan gear up for his 5th season of karting. Jordan and the team will be carrying the momentum into 2017 after taking out a number of heat wins and a clean sweep at Lismore Kart Club in Senior National Light.
In 2017 Jordan will again be competing in 2 classes, TAGR Light and KA4 Senior Light. Jordan will be making his state series debut in the NSW State Titles, along with racing in the SQ championship in South East Queensland in TAGR, while also competing in the Lismore J series in KA4 Senior.